REVIEW: Then Came You (Gamblers,#1) by Lisa Kleypas 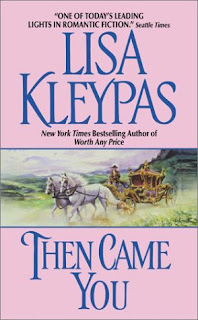 Reckless and wild, beautiful Lily Lawson delights in shocking proper London society--and will break any rule to flaunt her independence. And now she is determined to rescue her helpless sister from an upcoming, undesired marriage to Lord Alex Raiford, the arrogant Earl of Wolverton. Through fair means and foul, the headstrong hellion succeeds outrageously-but her handsome adversary is not to be outdone. A master gamesman, Lord Alex counters Lily's scorn with kindness, and parries her blistering barbs with gentle words and a soft, sensuous touch. For he has resolved to make the spirited miss pay dearly for her interference-with her body, her soul...and her stubborn, unyielding heart.

Then Came You,wasn't exactly my favorite book by Lisa Kleypas,but I can't really complain that I disliked it or I was bored either...It just didn't leave me quite amazed like almost every single book I've read by this author...
To begin with, I had a bit of a rough start with Then Came You.I wasn't immediatelly drawn to the story and I had a bit of a hard time with the main heroine Lily.At first I couldn't understand her and by the end I was a bit detached to her as a heroine.I just observed her,I couldn't relate to her even though I understood her.The same problem I had with the hero as well,Alex.Although I liked him infinitely more than Lily,still,I found some of his reactions bizarre to say the least (I really can't get his reaction in the library while he was drank,just can't ...). The dialogues between the main couple where fun and their public fights while they made me smile,I found them rather childish.
The story was good,with enough sentiment as well as mystery so this book falls easily under the category of fun reads,but somehow I just felt that it wasn't enough.
My favorite character is by far Derek Craven.He was an intiguing character and honestly I can't wait to read the second book in the series where he is the leading male!