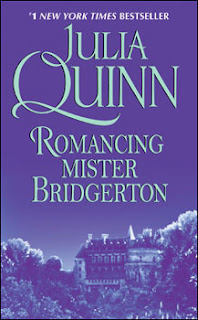 Penelope Featherington has secretly adored her best friend's brother for . . . well, it feels like forever. After half a lifetime of watching Colin Bridgerton from afar, she thinks she knows everything about him, until she stumbles across his deepest secret . . . and fears she doesn't know him at all.


Colin Bridgerton is tired of being thought nothing but an empty-headed charmer, tired of everyone's preoccupation with the notorious gossip columnist Lady Whistledown, who can't seem to publish an edition without mentioning him in the first paragraph.


But when Colin returns to London from a trip aboard, he discovers nothing in his life is quite the same, especially Penelope Featherington, the girl haunting his dreams!


And when he discovers that Penelope has secrets of her own, this elusive bachelor must decide . . . is she his biggest threat, or his promise of a happy ending?

Oh well,Romancing Mister Bridgerton must be my favorite book in the famous series by Julia Quinn up to now!Yes,it's that good!After Benedict's story,which was good,but didn't impress my all that much,comes Colin's story that just blew my mind!
Certainly,after having read 3 books in the series,I have made my mind about almost everyone in the Bridgerton family (except a few who aren't that fully portrayed until now,Francesca and Gregory mostly) and Colin was among my favorite characters from book one still!He, Anthony and Hyacinth were the characters that posed the most interest for me and up to now,their books haven't disappoint me in the least.
Penelope Featherington,Colin's love interest,is a well familiar character to the fans of the series and in more ways one could imagine...Seeing those two get together was more than delightful.
Both Colin and Penelope are two well developed and interesting characters and their romance and the way Colin slowly realizes he's falling in love with Penelope are wonderful to read!
Penelope is so much more than meets the eye and to be honest I have a feeling that Quinn focused more on her this time than in a Bridgerton sibling.Surely,Colin gets his share of attention but not nearly as much as Penelope who kind of reintroduces herself to the readers of the series.
And probably that exact ability of Quinn as a writer,to reintroduce her characters to her readers is what I love most in her writing,well,apart from her amazing sense of humor!
One thing is certain with Julia Quinn's books.No matter how many of them you read,you never get tired or bored and by each book you are only left eager for more!And that's exactly what I'm going to do: read each of her books in this series and then continue on to one of her other series!