REVIEW: It Had to be You (Chicago Stars,#1) by Susan Elisabeth Phillips 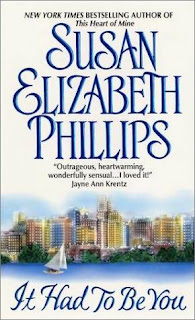 The Windy City isn't quite ready for Phoebe Somerville -- the outrageous, curvaceous New York knockout who has just inherited the Chicago Stars football team. And Phoebe is definitely not prepared for the Stars' head coach Dan Celebow, a sexist jock taskmaster with a one-track mind. Celebow is everything Phoebe abhors. And the sexy new boss is everything Dan despises -- a meddling bimbo who doesn't know a pigskin from a pitcher's mound.


So why is he drawn to the shameless sexpot like a heat-seeking missile? And why does the coach's good ol' boy charm leave cosmopolitan Phoebe feeling awkward, tongue-tied....and ready to fight?


The sexy, heartwarming, and hilarious "prequel" to Susan Elizabeth Phillip's This Heart of Mine -- her sensational bestsellng blockbuster -- It Had To Be You is an enchanting story of two stubborn people who believe in playing for keeps.

I can't even begin to describe how much I enjoyed reading It Had to be You!It was just the perfect pick both for my mood and the circumstances reading it!I mean,what's best than reading a perfectly written romance while drinking your coffee and relaxing at a beach?Cause that's where I read the best part of this book!
I have to admit,that I somehow had a rough start with this book,what with all the names and the things that kept happening,but as soon as I got into it,I just couldn't put it down no matter what!I loved everything about it and everything about Susan Elizabeth Philips's writing!It was fast paced and straight to the point,while Ms Philips has an undeniable ability to stir such emotions in her readers that one can't help but "live" the story!
The characters where well developed,flawed and believable.Phoebe,for all her sexiness,carried such an emotional burden,that I actually felt frustrated for her.But despite her insecurities,her past problems and everything,she was such a strong and smart character,that you just liked her immediately!Same goes with Dan,although before realising what was going on with him in a really early incident in this book,I found him a bit strange,to say the least...(Don't want to tell anything more,but as soon as you reach that point you'll know exactly what I mean!)
Anyway,the story had the right amount of suspence,narration and romance and everything blend in perfectly!I'm just happy that I picked this book at that particular moment,cause it suited my mood exactly,although, I think that whenever should I read it,I would enjoy it as much!Totally recommended for fans of romantic literature!