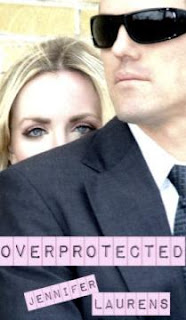 
Daddy hired you to be my bodyguard.


Charles: obsessed with keeping her safe, keeping her his, he hires the one person he knows she could never fall in love with: Colin.

Overprotected was a light,fun and quick read,summing it up,everything that I expected it to be when I picked it up!
As soon as I started reading this book,images from plenty movies rushed my mind,portraying a girl falling in love with the bodyguard an overprotective parent has assigned to her,from First Daughter with Katie Holmes to Chasing Liberty with Mandy Moore,this book,follows more or less the same pattern one might expect while reading such a story.And I didn't mind that fact one bit.After all,the premise doesn't promise anything else,and I picked up this book,probably because of that reason.
What I liked most about this book,was Jennifer Laurens's ability to transfer to her reader the suffocating state her heroine was living under.I caught myself being frustrated more than once towards both Ashlyn's parents,to the point I wanted to scream to them.I found it that it worked best for the story that Laurens was able to make her readers feel rather than just observe how lonely Ashlyn was.
What I would like to have more in this book,was a bit character development and to see a bit background information about at least Colin.Certainly,we could get an insight in Ashlyn's character but not nearly as much as I'd like and as for Colin,he was even less developed.Laurens however managed to develop infinitely more Ashlyn's parents characters and maybe that was her main cause.But still,I wanted a bit more.More of Colin's sentiments being expressed,more of Ashlyn's rebellious character and even more her attempts to escape her father's grasp.Nevertheless,that didn't bother me so much and didn't distract me from the story.
Anyway,as I said previously,Overprotected is a quick and fun book,and what the summary promises that's exactly what you get.Not a book I will re read,but one I recommend nonetheless.