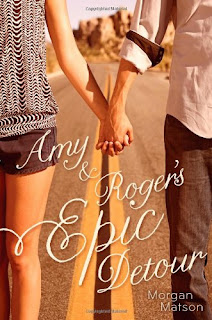 Amy Curry thinks her life sucks. Her mom decides to move from California to Connecticut to start anew—just in time for Amy's senior year. Her dad recently died in a car accident. So Amy embarks on a road trip to escape from it all, driving cross-country from the home she's always known toward her new life. Joining Amy on the road trip is Roger, the son of Amy's mother's old friend. Amy hasn’t seen him in years, and she is less than thrilled to be driving across the country with a guy she barely knows. So she's surprised to find that she is developing a crush on him. At the same time, she’s coming to terms with her father’s death and how to put her own life back together after the accident. Told in traditional narrative as well as scraps from the road—diner napkins, motel receipts, postcards—this is the story of one girl's journey to find herself.

Amy and Roger's Epic Detour is an outstanding YA novel!I can't even begin to describe who much I enjoyed reading it.When I picked it up,I have to be honest, I kind of expected it to be a fun read about a girl and a boy who embark on a road trip and who somewhere along that journey fall in love.I was mistaken.Because although this book is a story of two teenagers who fall in love in a trip is also so much more.It's a story about finding yourshelf,dealing with your problems,find ways to overcome your grief and ultimately,a book about hope and life.
The road trip Amy and Roger begin is described in the most vivid details.All those places and all those amazing sceneries that were described on this book,just made me check them on the internet almost right away.I was reading and at the same time I was at my pc,researching all those places and searching pictures to see for myself.Morgan Matson's ability to describe is brilliant.And not only to describe places,but emotions as well and make her reader feel exactly her heroes feelings.The reader sets himself on a journey himself of emotions and places.You see all those places the protagonists see and feel their emotions as if those emotions are your own and you somehow are along with them in that journey.
Amy and Roger are adorable.The character development is evident throughout the whole book and the reader can actually see how Amy slowly but steadily throws her armors and begins to feel and live again.The secondary characters were also good.One could expect that since no character,apart Amy and Roger, is present for more than a handfull of pages in this story,that there would be no interesting nor memorable side characters.But that's not happening.All the side characters,from Amy's brother Charlie to Bronwyn,Roger's generous friend,this book has enough secondary characters that have a way of sticking in your mind.
All in all,Any and Roger's Epic Detour is among those books that hit you straight on the emotion and a story that sticks in your mind for days after you finished reading the book.I totally recommend it to any YA lover and to anyone that loves a good story in general.