READING: Forget You by Jennifer Echols 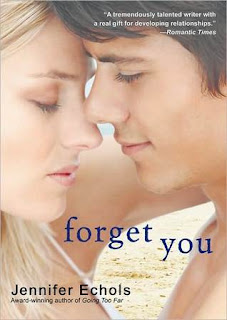 WHY CAN’T YOU CHOOSE WHAT YOU FORGET . . . AND WHAT YOU REMEMBER? There’s a lot Zoey would like to forget. Like how her father has knocked up his twenty-four- year old girlfriend. Like Zoey’s fear that the whole town will find out about her mom’s nervous breakdown. Like darkly handsome bad boy Doug taunting her at school. Feeling like her life is about to become a complete mess, Zoey fights back the only way she knows how, using her famous attention to detail to make sure she’s the perfect daughter, the perfect student, and the perfect girlfriend to ultra-popular football player Brandon. But then Zoey is in a car crash, and the next day there’s one thing she can’t remember at all—the entire night before. Did she go parking with Brandon, like she planned? And if so, why does it seem like Brandon is avoiding her? And why is Doug—of all people— suddenly acting as if something significant happened between the two of them? Zoey dimly remembers Doug pulling her from the wreck, but he keeps referring to what happened that night as if it was more, and it terrifies Zoey to admit how much is a blank to her. Controlled, meticulous Zoey is quickly losing her grip on the all-important details of her life—a life that seems strangely empty of Brandon, and strangely full of Doug.

Forget You by Jennifer Echols is among the books i was dying to read,since Going too Far was amazing,and i was majorly let down in the end.It's not that Jennifer Echols writes badly.I think this writer can write anything and do it with incredible efficiency.And it's not that the actual idea behind the story is that bad either.It's the whole setting that is used to lead the story that was a bit streched for me.
For one thing i got to dislike almost every character in this book.I didn't like Zoey's father (completely understandable i think given his actions).He was a selfish guy,only thinking of his joy and his self and not a single other person.I dare say that this character is among my top 5 list of characters i hated while reading a book and with a good reason.
I also hated Zoey's mother...Although i got to understand some things about her that justified her actions,i couldn't but resend her at the beggining.What true mother attempts suicide just because she married an as...le and can't spend another day far from him?But,as i said, i got to justify her actions by the end,so no harm done.
But the one who i couldn't connect no matter how hard i tried and couldn't get why acted the way she did most of the times was Zoey herself.Granted,with such a family,how should i expect a teenager to behave.I've definitely seen worse in real life!But my problem wasn't that i couldn't get the motives behind Zoey's actions,or i didn't agree with them.My problem was that despite how beautiful,smart and control freak Zoey was,most of the times acted like a really short sighted person.
The whole mystery in the story is what happened the night of the accident Zoey had.That was the crucial point around which the whole plot was built.What stopped Zoey from learning the truth immediately was among others the fact that she thought she had a relationship with Brandon (the totally hot guy she used to be friends with and despite how Zoey knows his character and how he regards sex and women,actually believes that now he's her boyfriend.)In my world,it's past naive the fact that you spend a reckless night with someone (who by the way didn't ask you for anything),and after that believe you're a couple.From that point on,every time i heard Zoey saying that Brandon was her boyfriend,i just wanted to slap her and tell her to get a grip on herself.So, since i believed that there wasn't any true reason for Zoey to feel obliged or faithfull to Brandon in any way,i just couldn't get the point of the whole story.There was no real reason for me that actually stopped her from asking Doug what really happened with no fear of any repurcussions.
Echols' writing is really good.And one of the reason's i kept on reading this book,was exactly that.No matter how pissed of i was with most of the characters in this book,i just wanted to learn how the story ended because Jennifer Echols does that to you.You may like or not her stories,but her writing style is good beyond discussion.
And one more thing i liked was Doug!Oh yes!In any other book Doug's character may haven't made such an impression on me but in this one,he is the only one i really enjoyed reading about!
All in all,Forget you was definitely not the book i expected it to be but if you don't mind the things i did,it is an enjoyable read.After all,Echols delivers stories full of emotion that captivate the reader.