I'm aware that the Bulgarian cover of Hex Hall has been revealed for some time now but i only yesterday came across it...And after i saw it,i just couldn't pass the opportunity of saying something about it!But before i say anything just take a look at it: 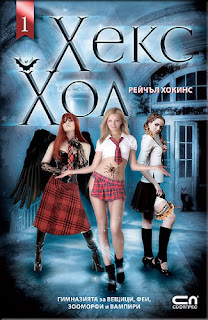 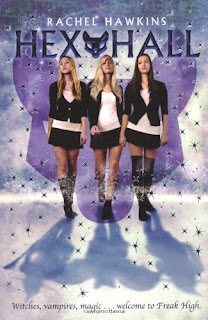 UK cover
I mean come on!!!Who thought about putting those outfits on those cover girls???I understand that they wanted to somehow take the UK Hex Hall cover and take it a step further,i just think they took it so many steps farther that they made it unrecognisable!I've come across other unfortunate foreign covers,and here in Greece there were times where a cover was really bad but never have i seen something like this.
Hex Hall is a YA novel and one where sex isn't even touchable in the air between the main characters,just hinted barely in a form of  mild sexual tension,nothing more...This cover seems like screaming sex to me (tell me it's not my twisted idea?) Imagine taking your kids to the bookstore and they're asking for this book...After seeing that cover would you or wouldn't you buy them that book?Ok,i may tend to over judge by an image but clearly,that's what a book cover is for...to grab the potential reader's attention and make him turn the book to read the summary.Anyway,i think it's the most unfortunate cover i have ever come across and one that clearly misleads the audience about a perfectly good book.
Posted by Unknown at 17:06